I have always loved rain and bad weather. I am not well suited for hot weather, and I am intrigued by what is left behind when taken out the serene weather and guaranteed sunshine.

Bad weather is good for exploring new places. It reveals delicate nuances in landscape which can otherwise vanish behind grand and spectacular views. Unforgettable memories are created when you find out that the waterproof outfit is really not waterproof in pouring rain, when wind is howling in your ears and the only way to stay upright is to lean firmly towards the wind, when hail storm interrupts relaxed ride in sunny weather and sandals in your feet amuse even yourself.

Photos are from the Isle of São Miguel, Azores, few years ago. Spring weather on the island changed constantly from sunshine to rain, from cloudy to hail storms, from warm to spine scraping winds, and at best all in the same day. My most favorite memory from the island is ending up in the middle of clouds and finding Lake Lagoa do Fogo amongst the sheltering clouds. The lake revealed its existence only momentarily when the clouds eased their grip from the landscape.

On the Isle of Jurmo, Archipelago Sea, Finland.

Summer flowers among rocks at the Isle of Jurmo, Archipelago Sea, Finland.

Rocky ground on the Isle of Jurmo, Archipelago Sea, Finland.

Photos are from the Isle of Jurmo in July 2012. Isle of Jurmo is one of the most enchanting places in the Archipelago Sea in Finland. Elongated island is like a rocky park in memory of the ice age. Different sized, shaped and colored rocks dominate this island, and vast heather fields and open treeless views resemble arctic landscapes of Finnish Lapland. It was fun to notice how the different sized rocks made different sounds when you walked on them. Rumble, rattle, rustle and rasp. Depending on the size of the rocks.

Passing by a familiar landscape can be tedious. Landscape that has lost its novelty long ago can be easily ignored. But sometimes even the familiar landscape will surprise you, and it is most refreshing to find versatile changes from the scenery that is well-known.

In October last year, as we were on one of our last boat trips of that autumn at the Archipelago Sea, the weather calmed down suddenly below the Airisto. The sun began to shine bright and on the way we passed by a slowly rolling sailboat race and got to fully enjoy the most gentle autumn weather. We had passed by this landscape several times before, in all kinds of weather conditions, but this calm and sunny weather was still surprising.

Thousands of different nuances in the weather, light, season and time of the day shape the landscape and make the scenery different every time. It is inspiring to discover something new and surprising in a familiar landscape. Familiar landscape is always the same but never alike. 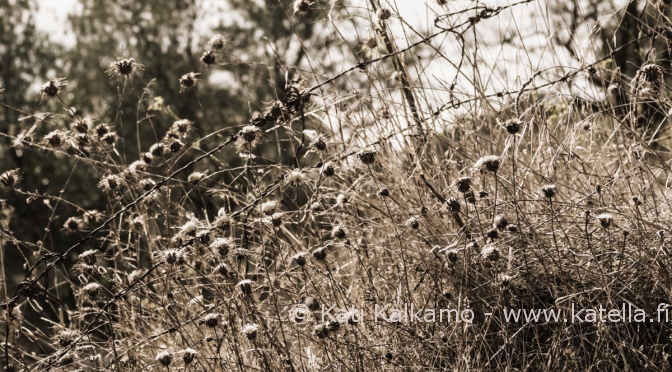 Traveling makes you see wondrous things around you and to focus on specialty of plain and ordinary. Along with new experiences and adventures you will often find new aspects of yourself.

Spider phobia vs. fear of heights

I suffer from quite extensive fear of heights and also from spider phobia. Last summer my phobias got to take measure from one another when I visited an observation tower. View from the tower was spectacular but coming down I had to descend the stairs backwards which led me face to face with a spider that was living in the corner of a step. Struggling for a while, I came to conclusion that the fear of heights was greater and I would rather stare at the spider in front of me than turn around. Finally I got to the bottom of the stairs and had learned a new aspect of myself.

Get all out of the role as a tourist

Sometimes it is also good to throw yourself fully to the role as a foolish tourist and let the locals have a good laugh at it. This happened in Dunedin in New Zealand, the home of the steepest street in the world, when we were excitedly taking photos of a fairly steep street to which a local passing by hollered “You know that this is not the steepest street in the world?” Answer to this was a stunned look and amused chuckles to ourselves. Although our camper van was more than once almost stalled to the streets of Dunedin, we never found the steepest road with our maps

When traveling in Azores, we were surprised when we were able to enter a pristine breakfast buffet table on our first morning of our journey. Same astonishment continued as we were circling around with our rental car and barely saw anyone around the town and on the roads after the breakfast. Only after we heard a conversation of two travelers at noon, we noticed that we had moved our clocks to one hour too early. We had set the alarm to wake us at eight am but instead had woken up at seven am. Amused by this we decided to continue our early mornings and to our surprise we enjoyed the early holiday mornings.

Traveling offers excellent opportunity to act opposite to one’s usual habits and to enjoy the exhilaration of surprise and to test one’s own boundaries and opinions. You can also often find yourself living every moment more deeply and fully enjoying plain everyday things and events.

Photos are taken in October 2012 from Varkaankuru nature trail that meanders along Varkaankuru Ravine in Finnish Lapland, Finland. My mind was filled with magical silence, enchanting last colors of autumn and constant babbling of the creek that followed alongside the path.

Autumn by the creek, Finnish Lapland.

Autumn colors on the leaves of a rowan by the Varkaankuru nature trail in autumn, Finnish Lapland, Finland.

Finding inspiration, plain and simple beauty and the joy of discovery. Stories behind the photographs. From Finland and around the world.